The Storybook Village of Annecy

December 10, 2018
After a few days with family in Paris, I had to decide where to go next. My first thought was to travel to Carcassonne via Provence for a week of wandering in the region. While studying my options, I came across a photo of Annecy similar to that above. I took the fast train to Annecy the following day and lost no time in exploring the Vielle Ville (old town).

The Palais d’Île was constructed in the 12th century on a rocky island on the Thiou River. It has served as a prison, a mint in the 14th century, the residence of the Dukes of Savoy in the 15th century, a courthouse and now serves as a museum for Architecture and Heritage Interpretation. 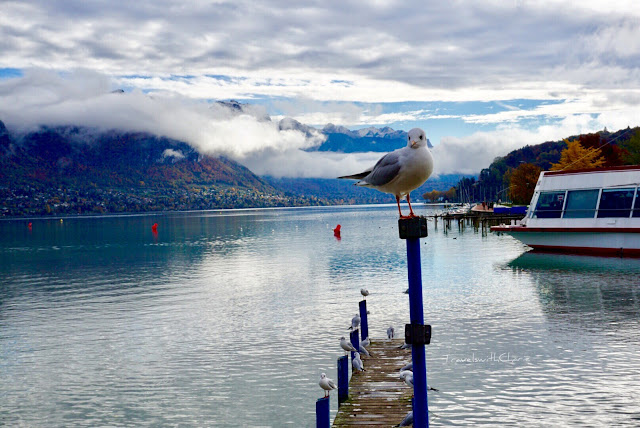 Lake Annecy
What I liked best about my visit to Annecy were the daily walks I took along the lakeshore. The backdrop of mountains and fall foliage made the stroll even more pleasurable. I felt invigorated after spending time by the crystal clear waters of the lake.


Pont des Amours (Lovers Bridge)
The Pont des Amours over the Canal du Vassé connects the Jardins de l'Europe and the sprawling lawn of the Champ-de-Mars. According to legend, if two lovers kiss on the iron footbridge, they will be united for life. What is "love"-ly about the Pont des Amours is the view of lake, mountains and foliage. You can't help but fall in love with the natural setting. 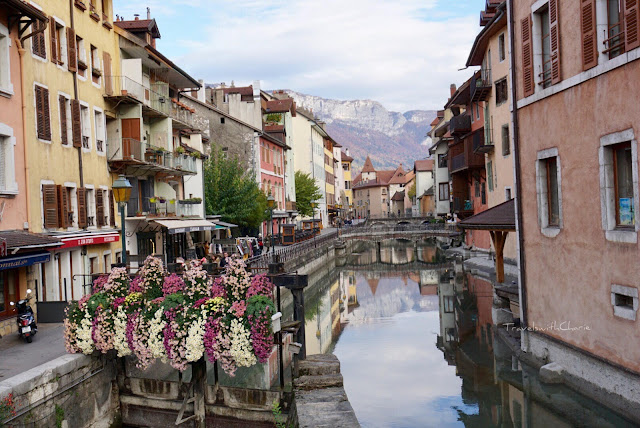 Colorful display of flowers complement pastel-hued buildings in this storybook village. Several canals and the river Thiou meander through town earning Annecy the designation, Venice of the Alps. 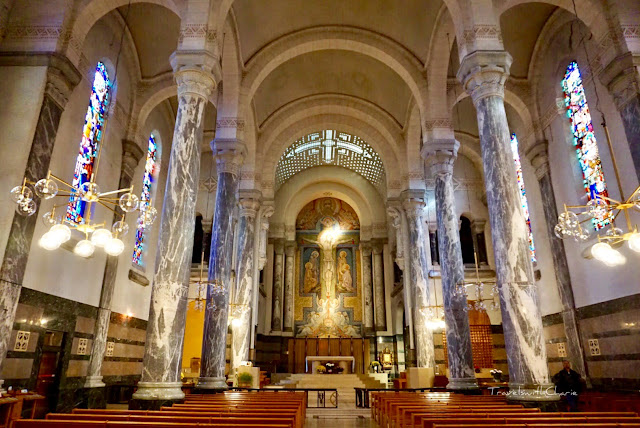 Basilique de la Visitation
On my way to the Basilica, I had to stop midway up the stairs to catch my breath. The stairs were steep and I could see there were more to climb. One of two teenage girls running up the steps turned around and asked me if I was okay. I nodded yes and told her I was taking a break. It was a thoughtful gesture on her part and it made me smile. If I wanted to make it to the top, I had to go at a much slower pace. It had been a long walk from the city center to the base of the hill. And I was almost there. 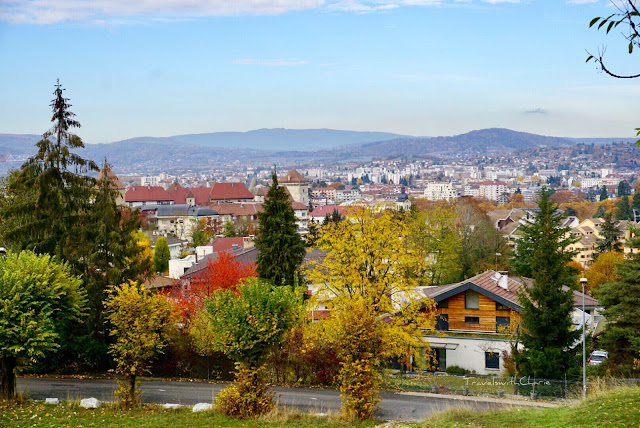 View of Annecy and Chateau from the Basilica
The Basilica is the resting place of St. Francis of Sales. He was the Bishop of Geneva from 1602-1622. Together with Jeanne de Chantal, St. Francis founded the Order of the Visitation of Holy Mary. He worked tirelessly to bring back Calvinists to the Catholic faith. St. Francis was a consummate writer. He authored the popular book, The Introduction to the Devout Life, which embraces the notion that holiness could be achieved by lay people.

"Never be in a hurry; do everything quietly and in a calm spirit. Do not lose your inner peace for anything whatsoever, even if your whole world seems upset." St. Francis of Sales. 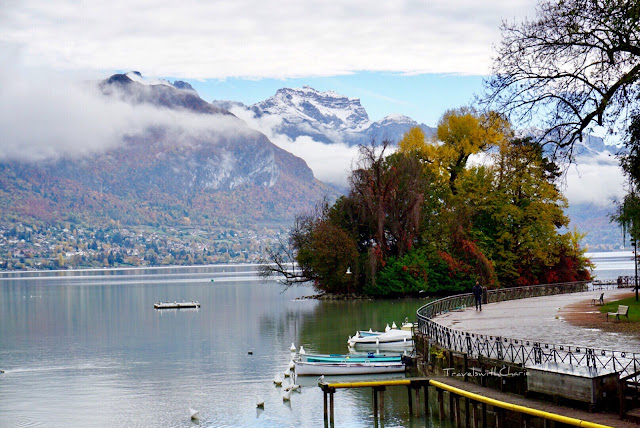 Ile des Cygnes
How to get there:
From Paris by train:
Departs from Gare de Lyon for the three-hour direct journey by TGV to Annecy.
From Geneva by bus:
Flixbus departs from Gare Routiere for the one hour ride to Annecy. Buy tickets online to get the lowest fare available. flixbus.com
Where to stay:
Best Western Plus Hotel Carlton
5 Rue de Glières
bestwestern.com
I like this modern hotel for its clean, spacious rooms and for its proximity to the old town. It is also conveniently located across from two grocery stores.
Where to eat:
Hippotamus
4 Quai Eustache Chappuis
The restaurant offers a three course meal including entrée, dessert and drink for less than 20 euros and the service is fast and efficient. Choices from the menu include steaks, burgers, fish and chicken dishes.