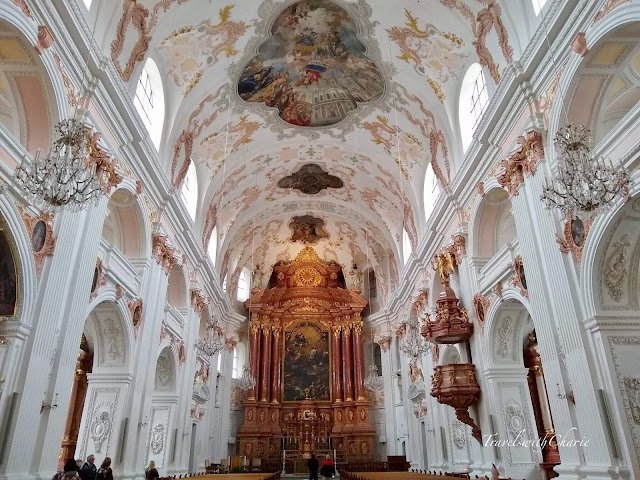 Sometimes when you revisit a place after many years of absence, you are disappointed because it is no longer what you remember it to be. I find this to be true of many cities in Europe where overtourism has transformed these once peaceful towns.  It doesn’t mean these places have lost their charm. It’s still there but it is a bit challenging to appreciate what you see when there are so many people around you (even in November) and the cacophony of herded tourist groups makes you want to run in the opposite direction.

But that’s just my view. It’s been nearly two decades since I was in Lucerne where I had walked around the quiet city streets and ended up at the beautiful Jesuit Church. This same Church was my first stop on a recent day trip from Zürich. And it is everything I’ve imagined since that last visit. The white walls with its Baroque ornamentation are not exuberant as other Baroque churches in Europe tend to be. Rather, the decor livens up the stark white walls. I love to sit inside this church and bask in the serenity of this hallowed space. 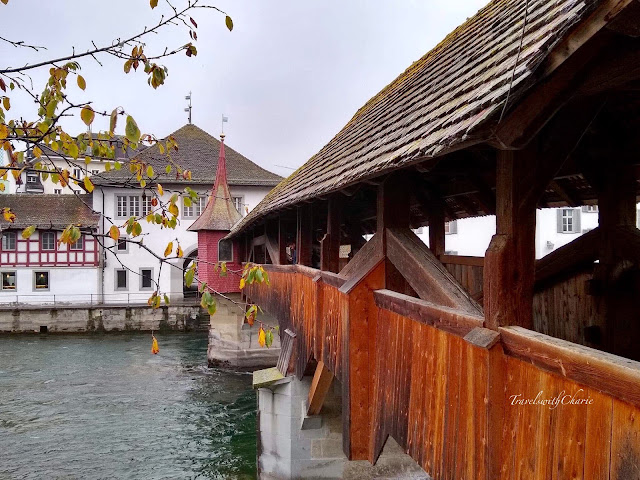 The  Spreuerbrüke (Spreuer Bridge) was on my bucket list because I don’t recall crossing this bridge during my past visits to Lucerne. It’s just downriver from Kapellbrücke (Chapel Bridge). It also has triangular paintings suspended from its ceiling. The theme of these panels is the Dance of Death by the painter, Kaspar Medlinger. 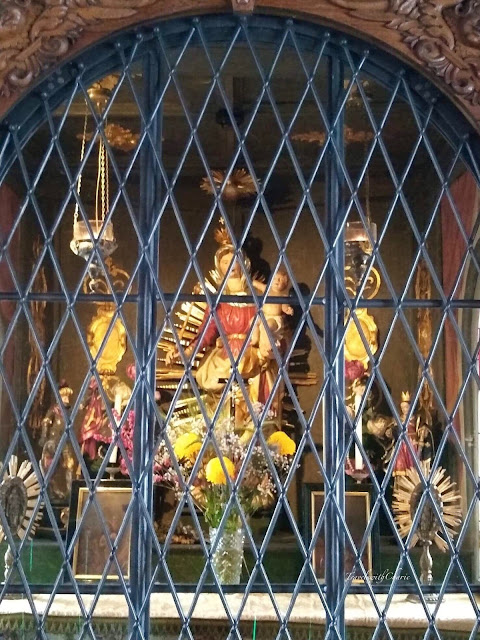 What a pleasant surprise to find an altar in the covered Spreuer bridge with the statue of the Virgin Mary holding the child Jesus in her arms! Lucerne is a predominantly Roman Catholic city in a Protestant country once led by Calvin and Zwingli. 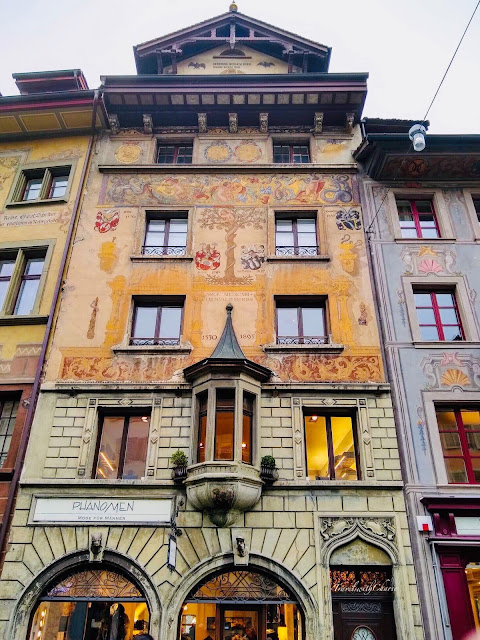 In the old center of Lucerne, buildings were traditionally adorned with fresco paintings depicting the history of the town or the guild house it represented. The house above shows Eve and the snake with a caption underneath the tree which reads: "amor medicabilis nvllis herbis" (there is no herb that can cure love"). 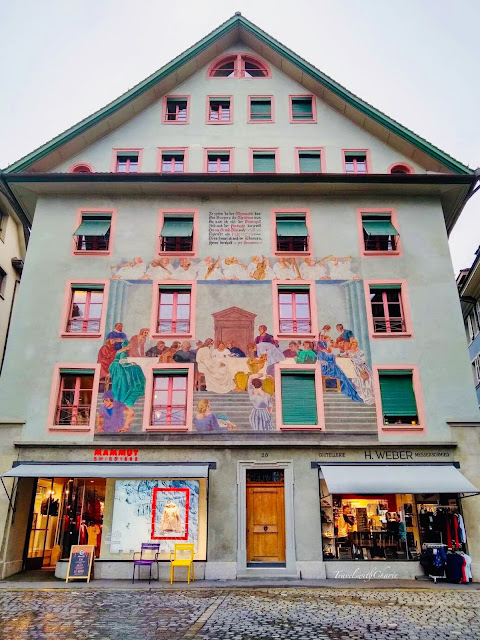 The fresco on the façade of this building is the miracle at the wedding in Cana when Jesus turned water into wine. It’s the perfect theme for the Weinmarkt square which used to be a fish market. 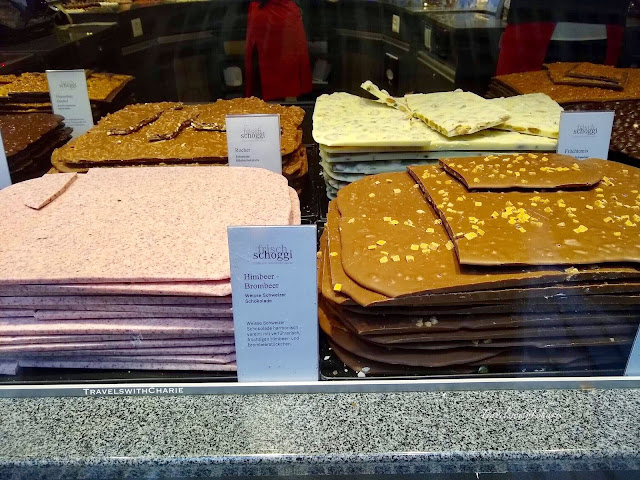 This is Switzerland where some of the best chocolates can be found. The pretty in pink chocolate sheet is raspberry and blackberry flavored. Behind it is Rocher milk chocolate and the cream colored sheet is Früchtemix, a mix of fruit and chocolate. Can’t resist chocolates with nuts. 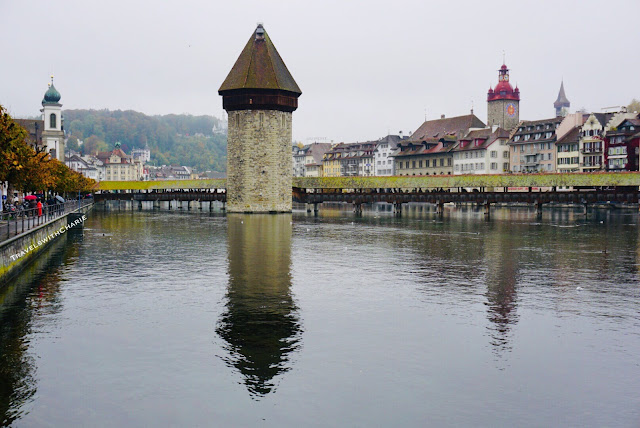 The iconic Chapel Bridge and Wasserturm (Water Tower) have been around since the 14th century. But the wooden pedestrian bridge was burned down in 1993. Of the 111 triangular paintings that used to hang from its ceiling, 81 were razed by the fire according to a plaque on the bridge. The panels depict the “development of the city and Republic from the Counter-Reformation point of view” and portrayals of the two patron saints of the city, St. Leogard and St. Mauritius. The empty spaces on the ceiling are reminders of those precious paintings lost in the fire. 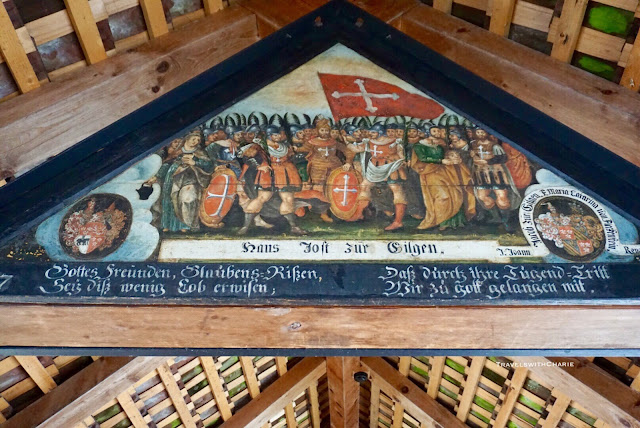 Here’s one of the triangular canvases hanging from the ceiling of Chapel Bridge. These panels were painted by Hans Heinrich Wagmann and often donated by city council members. Their names and coat of arms are portrayed on the painting. The donors of this particular panel are Jacob zur Gilgen and F. Maria Catarina von Fleckenstein. The name indicated in the center of the panel is that of Hans zur Gilgen, (possibly Heinrich Johann Leonz zur Gilgen) a priest, teacher and philosopher in the 17th century and a relative of the donors.

How to get to Lucerne:
Lucerne is a 45-minute train ride from Zürich and four hours from Geneva. Swiss PostAuto bus and Flixbus operate between Lucerne and major cities in Switzerland.

August 17, 2020
Raymund (Munich) Augustus Ortiz Conlu, M.D. is the Medical Director of PET-CT Center at Centuria Medical Center in Makati, Chairman of Nuclear Medicine at both The Health Centrum in Roxas City and St. Paul’s Hospital in Iloilo. He is also a Nuclear Medicine Consultant at Lung Center of the Philippines, Chairman of Radiology at Clinica Caritas in Makati and Consultant of Nuclear Medicine and Radiology at Philippine Heart Center in Quezon City. Dr. Conlu continues to be affiliated with St. Luke’s Medical Center at both the Global City and Quezon City locations as Consultant for the Nuclear Medicine and PET Department and PET-CT Center, respectively. He was Chairman of the Board of Examiners for the Philippine Specialty Board of Nuclear Medicine in 2016. Dr. Conlu is widely respected in his profession and is considered one of the top nuclear medicine specialists in the country.
Why did you choose to become a doctor?Munich: I was inspired by my lolo (Jesus Ortiz) and uncle (Rustico B. Orti…
Post a Comment
Read more