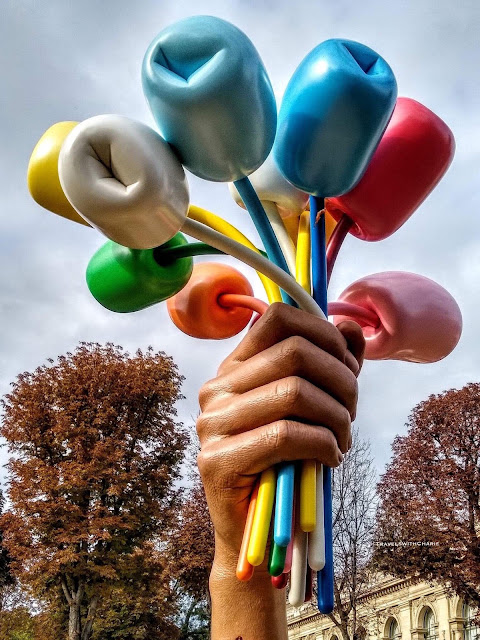 No matter how often I return to Paris, I am still making new discoveries. Paris seems to have an inexhaustible number of delightful things yet to be revealed. On my recent visit, I found unique architectural gems like the McDonald's restaurant and the newly installed artwork, Bouquet of Tulips, by Jeff Koons.

The Bouquet of Tulips is a monument to the victims of the terrorist attacks in Paris in 2015. It was recently installed near the Petit Palais and was immediately greeted with disapproval and negative criticisms including comparing the tulips with anuses. The monument was vandalized shortly after its installation. These colorful tulips are made of polychromed bronze, aluminum and stainless steel. 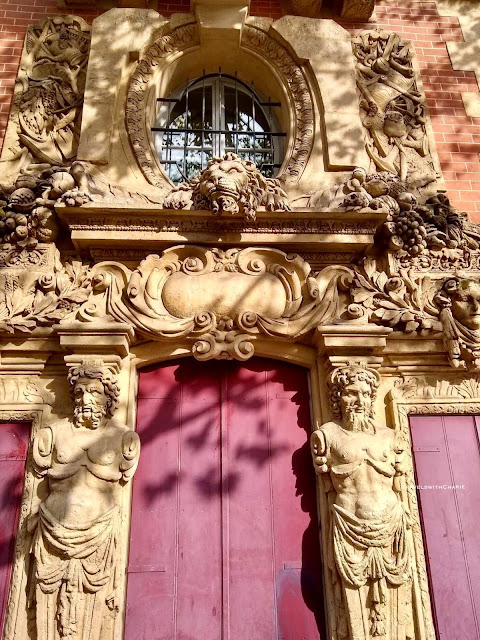 This Neo-Baroque Italo-Spanish motifs of the right wing façade of École Massillon is enough to stop anyone and pay attention. Quai des Celestins and Rue du Petit Musc. Metro: Sully-Morland 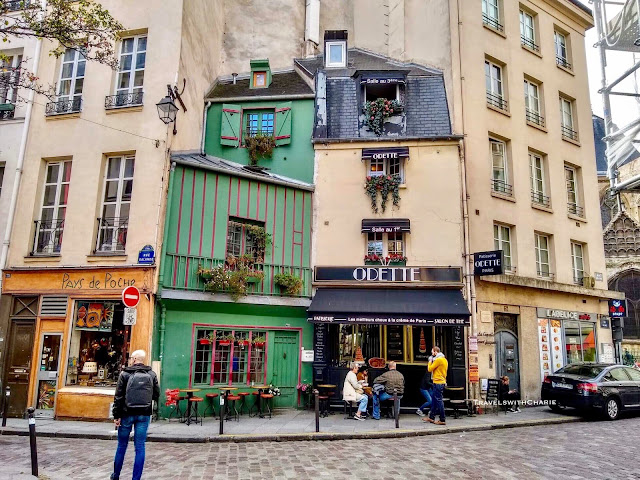 Down the street from Shakespeare and Company bookstore on rue Galande is the vintage building of Odette, a patisserie/salon de thé known for its cream puffs (choux pastry). Squeezed between two plain buildings, Odette seems out of place. The little shops on rue Galande were featured in the movie Midnight in Paris. 77 Rue Galande. Metro: Saint Michel or Cluny 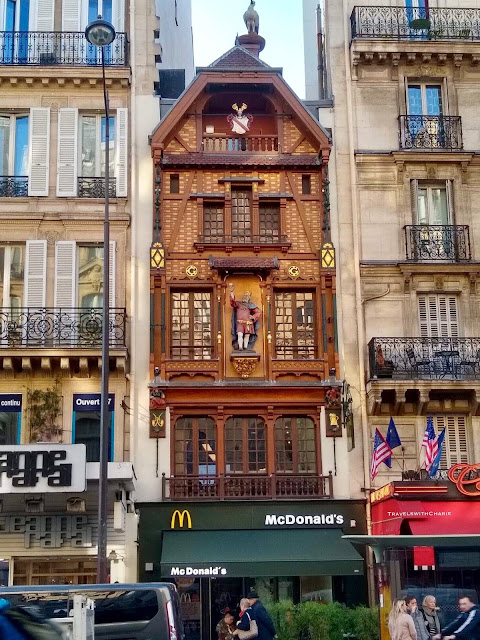 On my way from Gare Saint Lazare to Madeleine, I saw this McDonald's building. What a classic place to eat a double cheeseburger and fries! 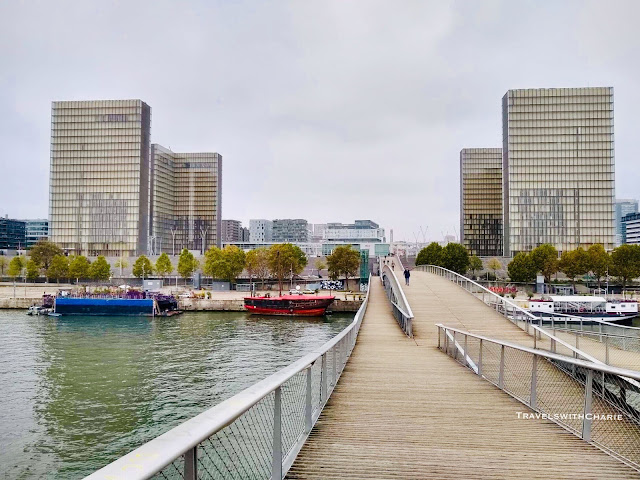 Across the Seine river from Parc de Bercy, is the Bibliotheque François Mitterrand. The four angular glass towers of the library are shaped like an open book. The towers surround a courtyard garden. There are 15 million volumes and printed materials in the library including the royal collections from the Middle Ages. Quai François Mauriac. Metro: Line 6 to Quai de la Gare or Line or 14 RER C to Bibliotheque François Mitterand 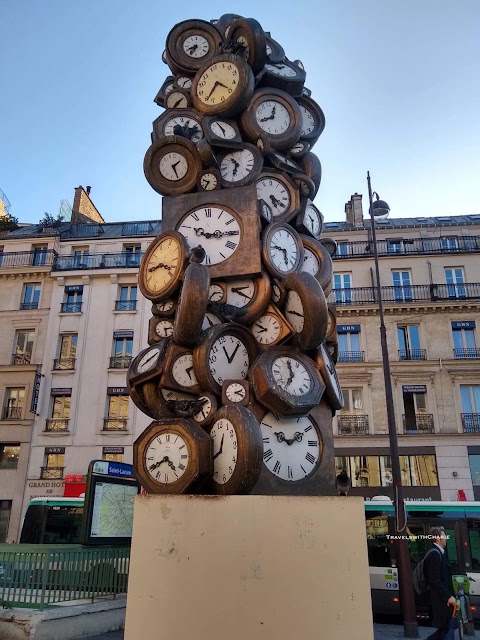 Timing is everything. Gare St. Lazare.


Update on the reconstruction of Cathedral of Notre Dame de Paris: 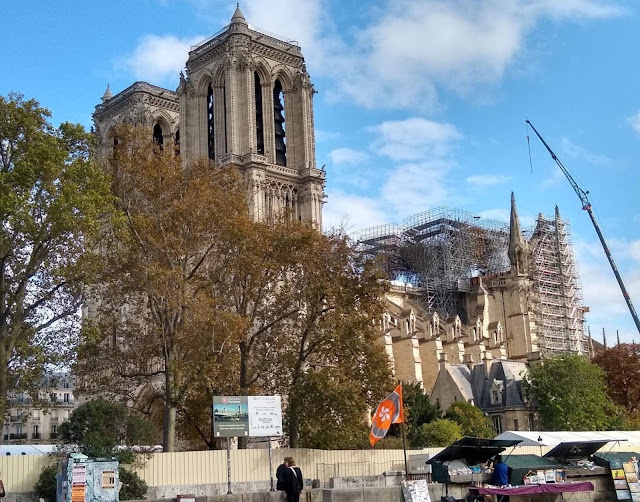 Reconstruction continues after the massive fire that ravaged the roof and spire of Notre Dame. The square in front of the Cathedral is still closed to the public. 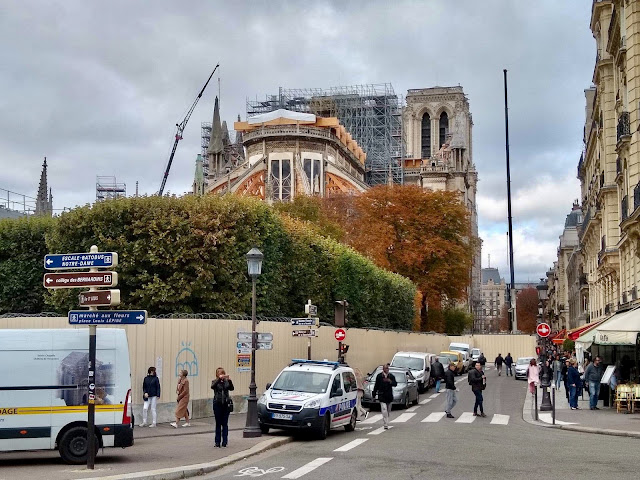 Work is ongoing on the buttresses at the back of the Cathedral.

*See also my article April in Paris 2019 for more off grid explorations in Paris.

Where to stay:
Holiday Inn Gare de Lyon
11 Rue de Lyon
This hotel is beside Rue Cremieux with its pretty pastel houses and a short walk to the Promenade Plantée, a park above the streets of Paris for more off grid explorations.

August 17, 2020
Raymund (Munich) Augustus Ortiz Conlu, M.D. is the Medical Director of PET-CT Center at Centuria Medical Center in Makati, Chairman of Nuclear Medicine at both The Health Centrum in Roxas City and St. Paul’s Hospital in Iloilo. He is also a Nuclear Medicine Consultant at Lung Center of the Philippines, Chairman of Radiology at Clinica Caritas in Makati and Consultant of Nuclear Medicine and Radiology at Philippine Heart Center in Quezon City. Dr. Conlu continues to be affiliated with St. Luke’s Medical Center at both the Global City and Quezon City locations as Consultant for the Nuclear Medicine and PET Department and PET-CT Center, respectively. He was Chairman of the Board of Examiners for the Philippine Specialty Board of Nuclear Medicine in 2016. Dr. Conlu is widely respected in his profession and is considered one of the top nuclear medicine specialists in the country.
Why did you choose to become a doctor?Munich: I was inspired by my lolo (Jesus Ortiz) and uncle (Rustico B. Orti…
Post a Comment
Read more