The Wooded Hills of Kamakura 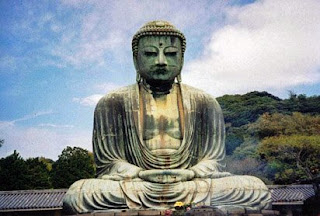 The Kamakura countryside is within an hour by train from the hustle and bustle of Tokyo but is so far removed from the trappings of the big city. Set amidst a backdrop of wooded hills and sea, it is the ideal place for prayer and meditation. A small train chugs along the Enoden line from Kamakura to Hase where we got off for the short stroll to see the Daibutsu or Great Buddha. Measuring 37 ft. in height and weighing 93 tons, it is the second largest bronze statue of Buddha in Japan. I could see its face through the wooden slats which made up the gate enclosing an area where a temple once sheltered the statue. That temple was washed away by a tsunami in 1495, exposing the Daibutsu to the elements for the last 500 years. But this has proved to be a godsend because visitors can see the Amita Buddha in full view, serene yet majestic against the natural setting.

Closer to the train station is Hasedera (Hase Kannon Temple) which is up on a hillside. A typical Japanese garden leads to a flight of stairs. Halfway up is an area full of statuettes of Jizo, the deity of children. In the past, these figures were offered by parents for the protection of their children. Today, it symbolizes the children that are stillborn, miscarried or aborted. There are so many of these statuettes that temple staff have to replace them every year to make room for new offerings. Hasedera is dedicated to Kannon, the 11-headed goddess of mercy and happiness. Inside the largest of the halls or Kannon-do is a 30-ft. gilded wooden statue of Kannon. Worshippers toss money into the offering box, clap their hands three times then bow their heads and pray. Outside the hall, pilgrims surrounded an incense burner to draw in the cloud of smoke emitting from its embers for good fortune.

A terrace affords a panoramic view of Yuigahama, the Miura peninsula and the rooftops of Hase. Picnic tables and chairs allow visitors to enjoy their surroundings while eating or relaxing. Down the hill is a small cave dedicated to Benten and to other minor gods. Benten is the goddess of beauty, wisdom and the arts and as such, is the patroness of geishas, dancers and musicians.

Three red torii gates mark the way to Tsurugaoka Hachimangu, a Shinto shrine dedicated to Hachiman, the Kami (god) of war. He is the patron of the samurai and the Minamoto family. It was Minamoto Yoritomo who founded the Kamakura government and was its first shogun. He enlarged and moved the shrine to its current site in 1180. There was a wedding party at the shrine and the tourists (myself included) waited patiently for the ceremony to finish for a chance at taking a picture of the bridal entourage dressed in traditional attire. While waiting, I examined the wooden tablets called ema on which were written the wishes of worshippers for special blessings. I also found strings of fortune telling paper called omikuji. Tying the omikuji to a tree branch ensures good fortune will ensue or bad luck will be averted.

One of Tibet's most revered yogis, Milarepa, wrote the following song in the 11th century:
"Rest in a natural way like a small child
Rest like an ocean without waves
Rest within clarity like a candle flame
Rest without self concerns like a human corpse
Rest unmoving like a mountain."

Under the glow of fading light in the Kamakura countryside, I rested blissfully, albeit fleetingly, before being swept once more by the sea of humanity that awaited me in Tokyo.


View My Saved Places in a larger map

Getting there: The JR Yokosuka line bound for Zushi, Kurihama or Yokosuka departs from Tokyo Station for the hour-long trip to Kamakura. From Kamakura to Hase, take either the Enoden line or a bus bound for Hase in front of the train station. The walk from Kamakura station to Hase may take 20 minutes or so.

Article transferred from my Geocities blog
Photo by Charie

March 01, 2013
Carlos "Botong" Francisco, FILIPINO STRUGGLES THROUGH HISTORY Oil on canvas, 1964, (located at ManilaCity Hall) A National Cultural Treasure owned by the City of Manila
Carlos Botong Francisco: A Nation Imagined is the latest art installation at the AyalaMuseum in Makati to celebrate the 100th birthday anniversary of Carlos “Botong” Francisco (1912-1969), a Philippine National Artist. Forty paintings and lithographs were culled from various private collections to form this exhibition. Of the large scale paintings on display, Maria Makiling and Fiesta, both oil on canvas, are representative of the indigenous genre which Botong loved to portray. In Maria Makiling, Botong reveals a relaxed and recumbent woman with her legs dangling in the cool waters of the stream and playing with an exotic deer by her side. Fiesta is about how the Filipino people gather to celebrate an important occasion, be that a religious feast or a wedding. The central figures are dancing the tinikling, a po…
Post a Comment
Read more