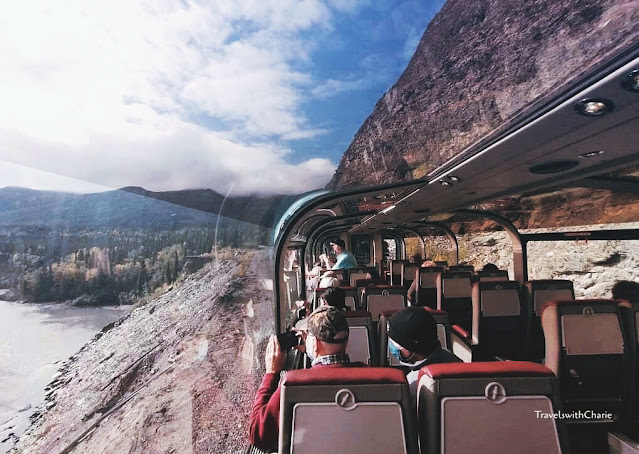 Goldstar Service with Alaska Railroad
Taking the train to Denali is one of the best ways to enjoy the Alaskan landscape. The trip from Fairbanks to Denali takes four hours and riding in premium class with its glass dome ceiling certainly adds to the total experience. There’s also an outdoor platform if you wish to take pictures with the glass windows out of the way.
Goldstar service also includes breakfast if you leave early in the morning and two complimentary drinks. There’s a bar conveniently located in your car. And a guide who talks about the views and the few towns you see along the way. Your luggage is checked through to your hotel.
On the way back to Fairbanks, I opted for an Adventure Class seat which is about half the price of the Goldstar seat. There is no glass dome ceiling but the windows are large and clean and the cleaning service stops at each car every half hour or so to clean the restrooms and empty the trash bin.
There’s one downside to this train journey. While my luggage was checked through to my hotel in Denali, I had to pick it up at the Fairbanks train station. The scene at the station was nightmarish. There’s no carousel to speak of so there was a crush of passengers by the baggage counter as bags were offloaded. If you have a plane to catch, make sure you have plenty of time to make it to the airport. 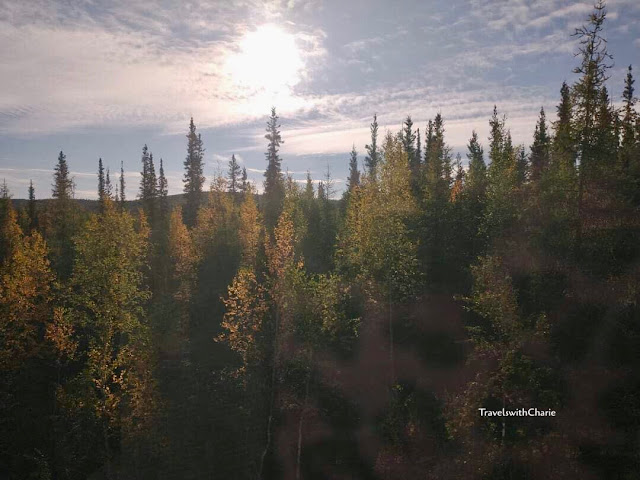 The most common trees in this part of Alaska are spruce (both white and black), birch and poplar. Athabascan Indian houses were made from spruce logs. Birch bark was used for making kayaks. For more information about the Athabascan Indians of Interior Alaska, check this link: https://www.travelswithcharie.com/2021/09/athabaskan-indian-village-life.html 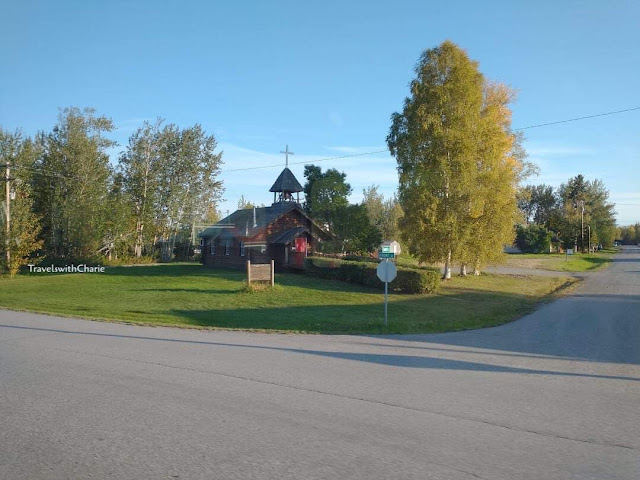 St. Mark’s Episcopal Church, Nenana
St. Mark’s is a historic church dating back to 1905, three years after the discovery of gold in Fairbanks. Nenana is a small town 55 miles south of Fairbanks with a population of 300 (according to a 2010 survey). 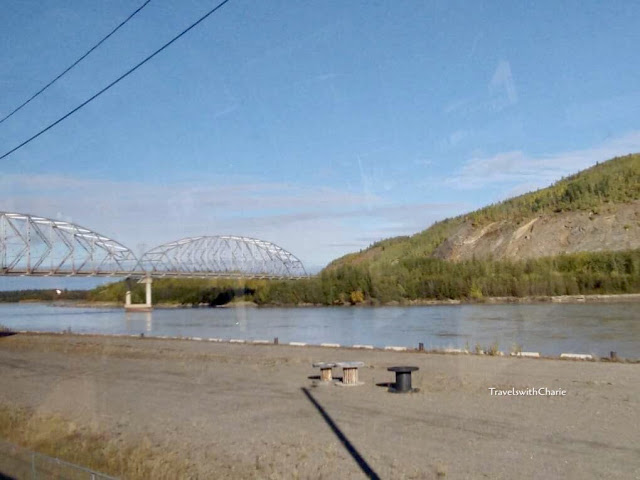 The Alaska Native Veteran’s Honor Bridge is a truss bridge crossing the Tanana River and connects Anchorage with Fairbanks. 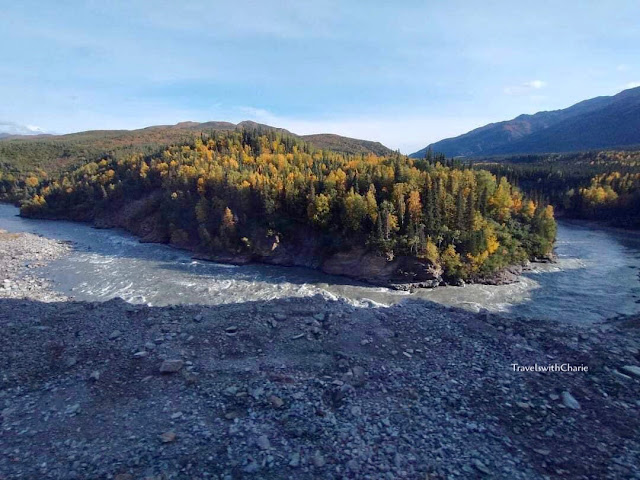 Nenana River Gorge
This is the prettiest area of the train ride and the most thrilling with the train hugging the side of the cliffs and the sheer drop below. 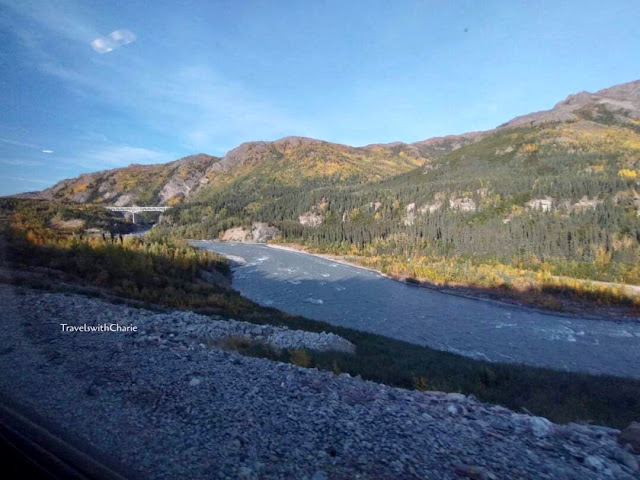 Nenana River Bridge in Moody
This truss bridge near Moody (in the background) is in the path of high winds with gusts reaching 120 mph. 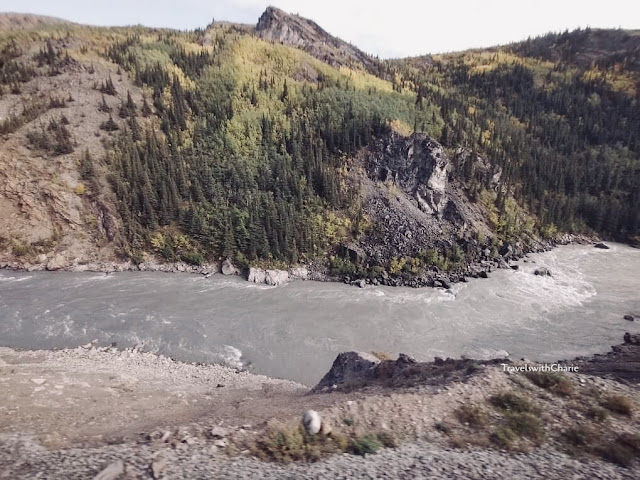 The train tracks are so close to the edge of the cliff that it has to travel at a snail’s pace once it approaches the gorge near Healy. The tracks in this area have been repaired due to soil erosion. 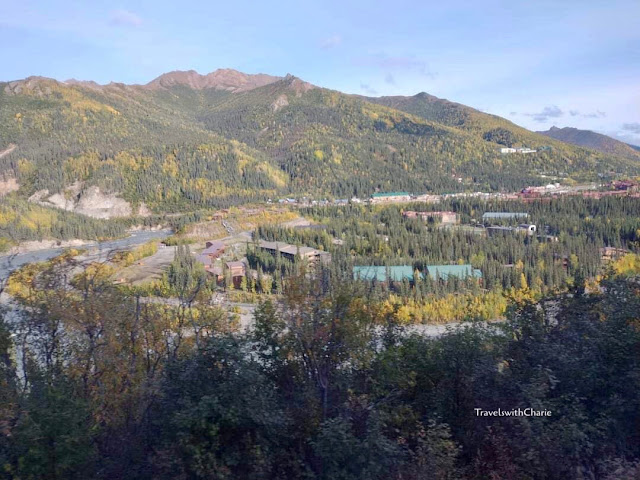 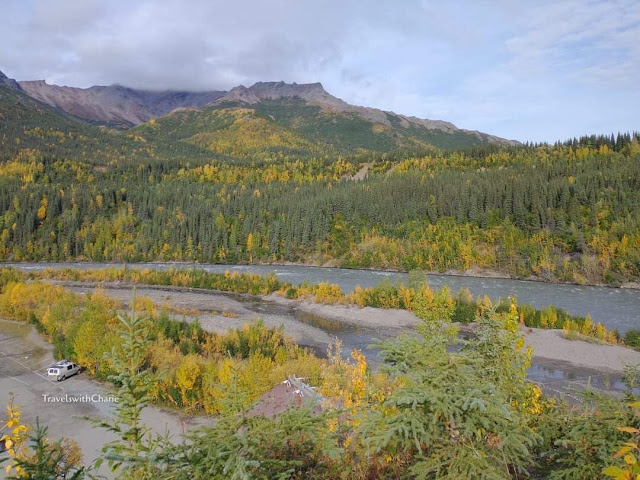 Nenana River
This is the view of the river from my hotel, the McKinley Chalet Resort.
Whenever I think of Alaska
I remember its wilderness, and then
I wonder if I will return there
And if it will thrill me again
Such a vast and quite beautiful landscape
For hundreds and hundreds of miles
Raising my spirits and lifting my mood
And creating a world of smiles.
By Phil Soar 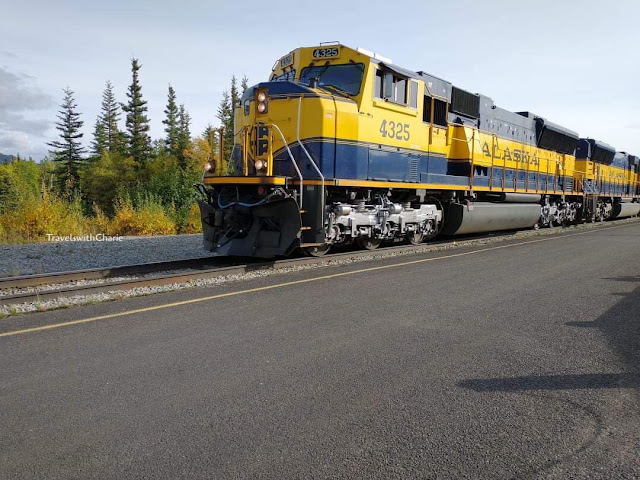 Alaska Railroad train arrives at Denali Station
For more information about the train services and reservations from Fairbanks to Denali or from Anchorage to Denali, you can visit alaskarailroad.com.
*****
Images by TravelswithCharie