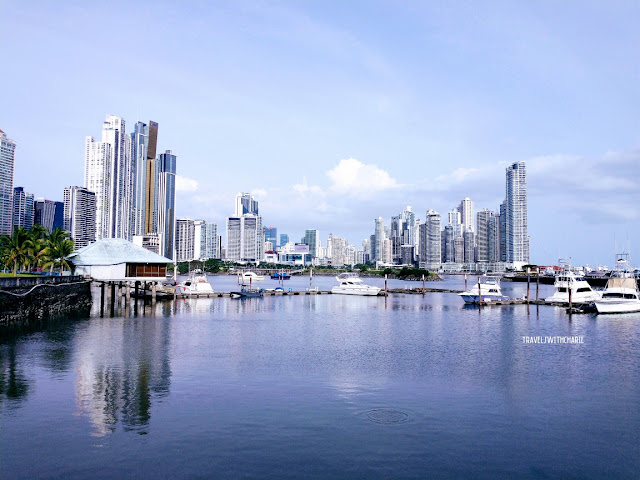 Panamá City Skyline
Panama is a country of contrasts. Modern skyscrapers form the backdrop to 16th century ruins. Bustling traffic stands still beside a calm coastline that provides aqua therapy on the most stressful days, like before Mother’s Day. The people are friendly and always greet you with “Buenas”, the seafood is fresh and served in generous portions, and the highways and streets are clean. How about the music? I feel I could dance to that beat all night long. Si, Señor! 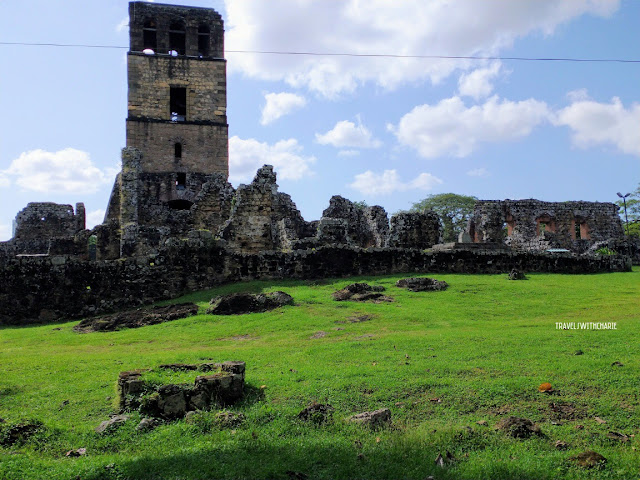 Panamá Viejo
Panama Viejo is the first permanent European settlement site on the Pacific coast. Pedro Arias de Avila and his companions settled here in 1519. The town flourished through the years and had its own Cathedral, Archbishop’s house, convents, a hospital and well drawn up streets. Fires, an earthquake and finally the attack of Welsh pirate, Henry Morgan, in 1671 razed Panama Viejo to oblivion. It was not rebuilt and was abandoned after a new city was established a short distance away in what is now, Casco Viejo. The belltower above is one of the few well preserved stone structures from the original settlement.
To get there, I took an Uber from my hotel to Panama Viejo which is outside the city center. There’s an entrance fee of $10.00 for adults who are foreigners and $3.00 for children (in December 2021). A shuttle takes visitors to the site. https://www.patronatopanamaviejo.org/ 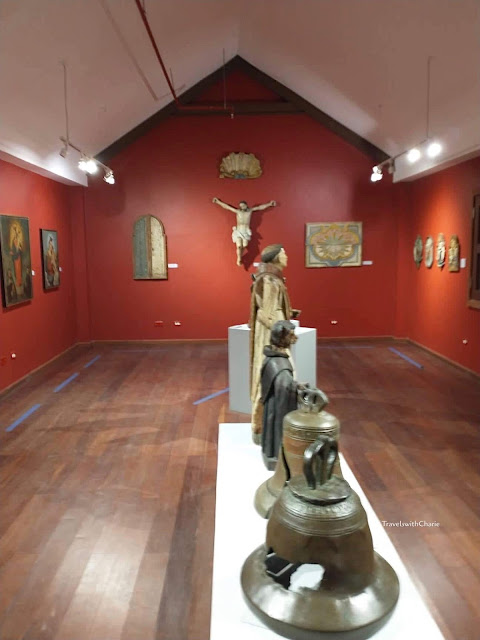 Samuel Lewis Garcia de Paredes Plaza Mayor Museum
The Plaza Mayor Museum within the Panamá Viejo archeological site has a collection of historical objects, many of which were found on-site, spanning 1500 years of history from the pre-Hispanic period to its destruction in 1671. 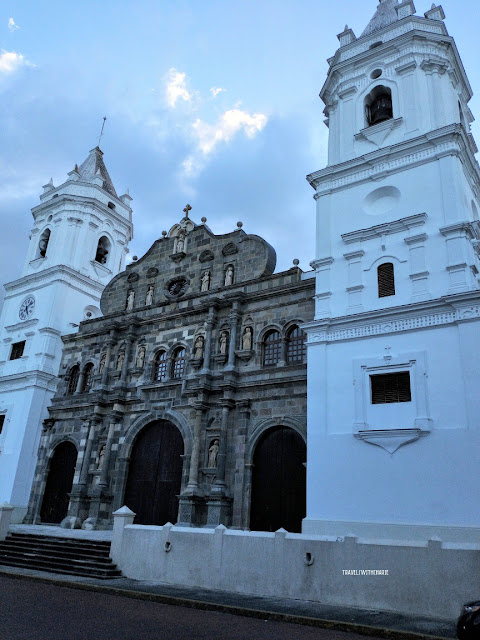 Basilica of Santa Maria Antigua, Casco Viejo
After the destruction of Panama Viejo, Casco Viejo (Old Quarter) was founded in 1673. It was fortified using some of the stones from the ruins of the old city. A part of the old walls can still be found in Casco Viejo.
The Basilica of Santa Maria Antigua or the Metropolitana Archcathedral is one of seven churches in the old district. Construction of the Archcathedral started in 1688 but it was not consecrated until 1796 or 108 years later. The bells in the left tower were taken from the first cathedral in Panama Viejo having survived the sack of 1671.
Panamá Viejo together with Casco Viejo, also known as Casco Antiguo, are a UNESCO World Heritage Site. 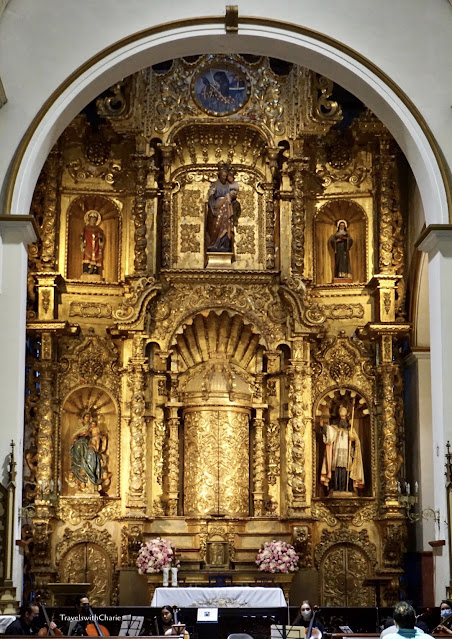 Iglesia de San Jose, Casco Viejo
This golden retablo survived the destruction of Panamá Viejo and is now in the Church of St. Joseph. It is made of carved mahogany and covered in gold leaf. The statue of St. Joseph and the Child Jesus is right above the tabernacle. 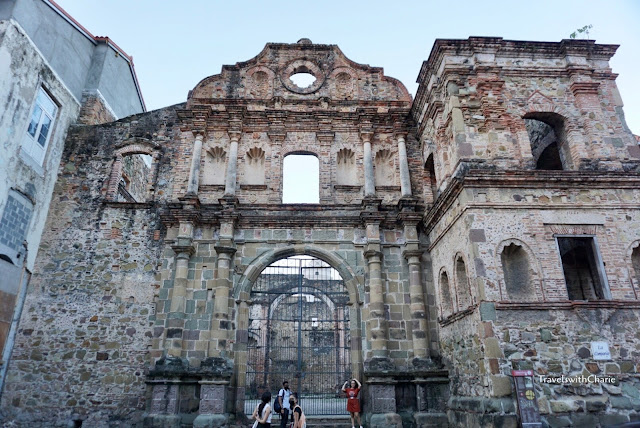 Ruins of the Church and Convent of the Society of Jesus, Casco Viejo
Construction for a college and university was started in 1741. The Royal and Pontifical University of San Javier was inaugurated 1749 and operated until the Jesuits were expelled from all Spanish territories in 1767.  A fire destroyed the building in 1781 and the earthquake in 1882 sealed its fate. 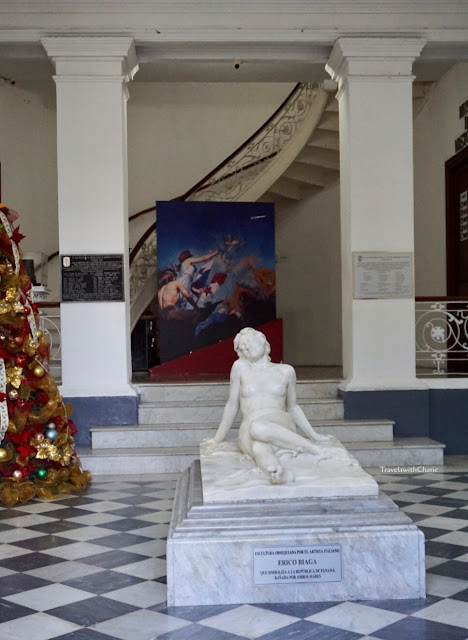 The symbol of the Republic of Panamá, Casco Viejo
The Palacio Municipal (City Hall) has a museum on the ground floor. Erico Biaga, an Italian sculptor, created this iconic muse representing Panamá bathed by both seas, the Caribbean and the Pacific. 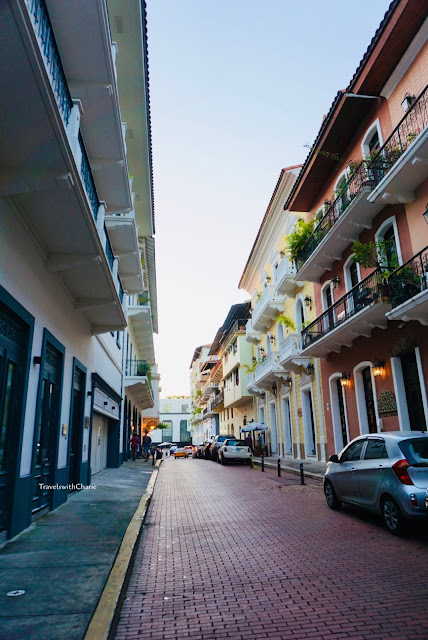 Casco Viejo
The old quarter has concrete pavers and the buildings have been renovated while preserving the original architectural plan. Notice the long balconies adorned with plants. 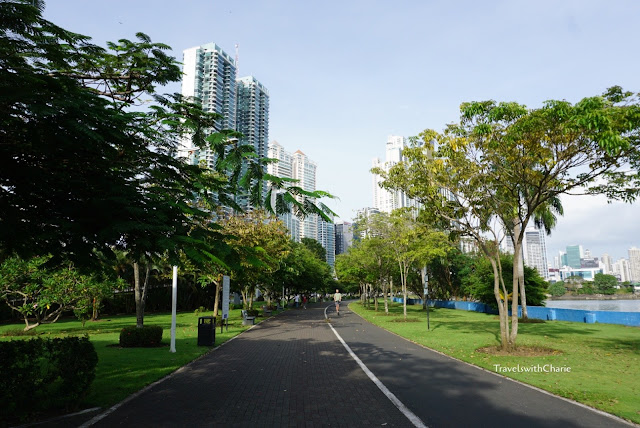 Cinta Costera (Coastal Beltway)
I took a long walk from my hotel to the jogging/biking trail right beside the ocean. This is a 9km stretch that begins in Casco Viejo and passes the Mercado de Mariscos all the way to the Maracaná stadium area. There are children’s playgrounds, benches for tired feet, kiosks for water, ice cream and snacks and the therapeutic view of the Pacific. Several pedestrian bridges connects the Cinta to the other side of the Pan American Highway for safe and easy crossing. At the Mercado de Mariscos, you can relax at one of many restaurants and order freshly caught seafood. 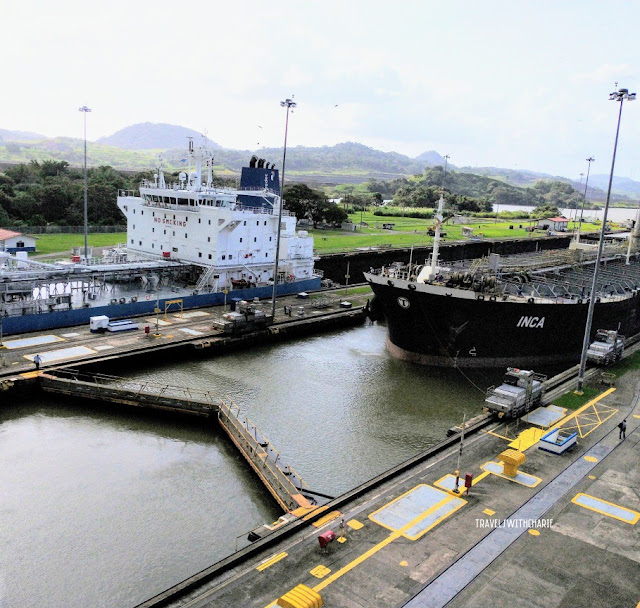 Miraflores Locks
Watching the locks open for ships to transit the Panama Canal has been on my travel bucket list since I read, The Path Between the Seas by David McCullough. And I finally checked it off. 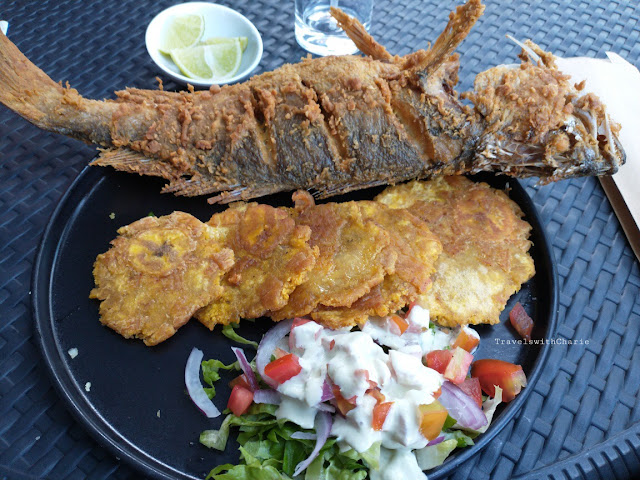 Pescado frito and patacones (fried plantains)
On my first day in Panama City, I sat outdoors at a cevicheria for early dinner and it didn’t disappoint. I was served this plateful of food with fried Corvina fish and a side dish of patacones, fried green plantains. See recipe here: https://www.food.com/recipe/patacones-fried-green-plantains-panam-347132 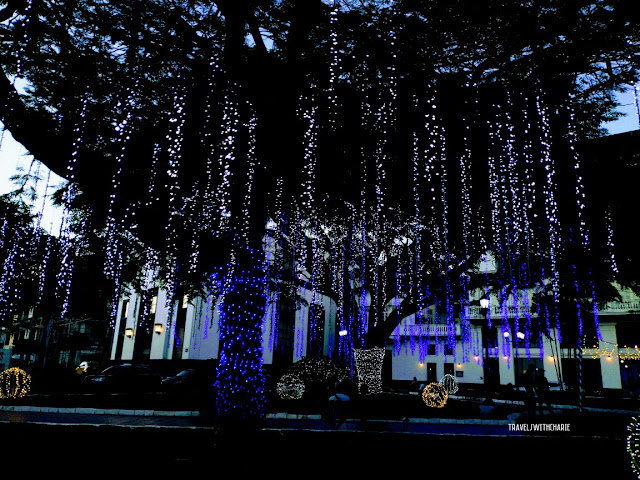 Plaza Tomas Herrera, Casco Viejo
There are many outdoor cafés and restaurants around Plaza Herrera. If you’re  interested in trying the most expensive coffee in the world, Panama Geisha (Gesha), theres a coffee shop just a minute’s walk from the square that serves this bean juice. Casa Casco has a rooftop bar overlooking the square and an enviable view of sunsets. Vive por más. Live for more!
Where to stay:
Holiday Inn, Financial District
Calle Ricardo Arango and Calle 53E, Panama
ihg.com
The hotel is well situated near a number of restaurants. It’s also close to Soho Mall which is where you’ll find the boutiques for famous brands like Channel and Louis Vuitton as well as a selection of restaurants on the top floor.
How to get around:
From the airport to your hotel, there is a taxi company that is allowed to operate just outside the arrivals area. The fare is fixed. I paid $30.00 to my hotel in the Financial District. Getting around Panama City is easy and inexpensive with either Uber or taxi. If you don’t have the Uber app, ask the hotel desk to help you. Do the same when riding a taxi and make sure you know the fare to your destination as the taxis have no meters.
Currency:
U.S. dollar. Coins are different from US coins but have similar value.
Where to buy souvenirs:
Conway Dept. Stores have a selection of souvenirs and are reasonably priced. There are also a few souvenir shops in Casco Viejo and they have a lot more selections. The Panama hats are too pricey at $50.00++. Note that there are two kinds of Panama hats: the popular Panama hat which originally came from Ecuador and the local Panama hat which is colorful and has a wider brim.
*****
Images by TravelswithCharie