Costa Rican Art at The MAC 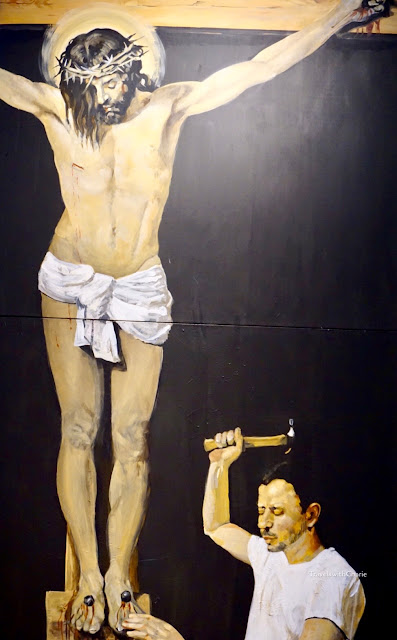 Que Clavo! (What a nail!) Luis Tenorio Rosales, 2010, acrylic on canvas
As I indicated in a previous post, this painting of the crucifixion is one of the most evocative works of art I’ve seen. The intense face of a T-shirt clad man as he nails the feet of Jesus Christ to the cross leaves no illusions that this a contemporary work of art of an age old religious subject that has roots in Christian history. Is this man just a carpenter doing his work or is he a symbol of the sins we commit everyday that lodge the nails deeper with every transgression? What a nail! 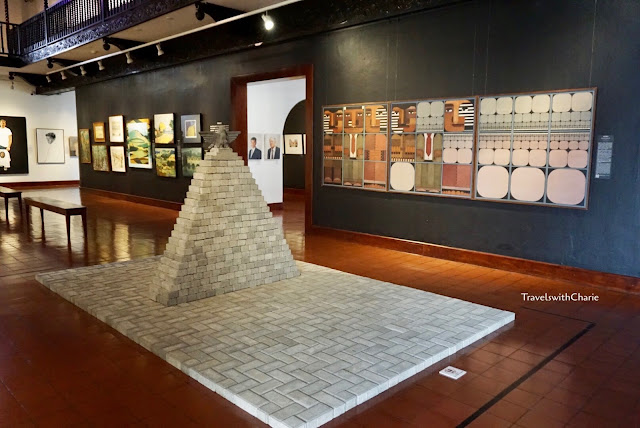 Aguila (Eagle), Javier Calvo Sandi, 2017, stone
The Eagle is a monument representing both the former president, Leon Cortés, and the Nazi eagle. According to Calvo Sandi, President Cortés had an affinity with the Nazi Party of Costa Rica having appointed Max Effiger, the president of the local Nazi party, as his adviser on immigration matters.

The eagle is also a symbol of flight. “I fly like an eagle in granite material that vindicates the indigenism of the nationalist discourse of the new sensibility and the Costa Rican animalistic tradition.” Further he said, “a Nazi eagle in a Creole material synthesizes the conceptual or historical contradiction with which we later based our entire national identity.”

Los Poderes (The Powers), Alvaro Bracci Ramelli, 1983, acrylic on canvas
Alvaro Bracci Ramelli is an Italian industrial engineer who moved to Costa Rica in 1970. His works are defined by its geometric and symmetrical composition. He portrays his subjects with a mechanical characteristic found in orthogonal, industrial and graphic designs.

In Los Poderes, Bracci has divided the panels in multiples of 3. Three square panels with 3 identifiable figures: the military with its brown uniform, the politician with his tie and the cleric in a Catholic bishop’s robe. Notice the mechanical repetition and  the decomposition of figures into geometric units on the third panel. 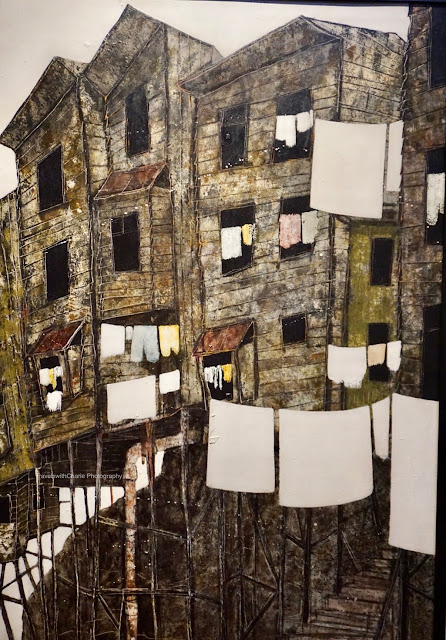 Untitled, Rafael Ángel Garcia Picado, 1974, acrylic on wood
From the series, Ciudades espontáneas (Spontaneous Cities)
‘Felo’ Garcia is a visual artist, architect, former professional soccer player and professor of fine arts. He served in various governmental positions like Ministerio de Obras Publicas y Transportes, Ministerio de La Cultura y Juventud and was the first director of the School of Architecture at the University of Costa Rica, among others. This painting is of an informal settlement known as tugurios that were found in the outskirts of the metropolitan city of San Jose. The artist experiments with the abstract forms of wooden houses accentuating square windows, hanging laundry, the geometric forms running down to the basement and linear electric power cables. 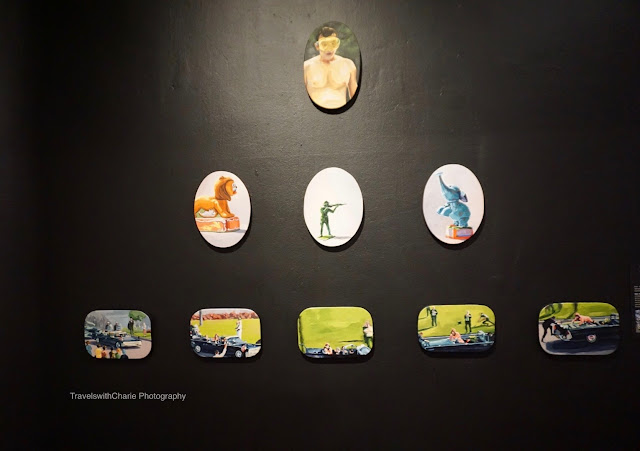 Fibonacci (from the Copistas series), Adrian Arguedas Ruano, 2008, oil on wood
Adrian Arguedas Ruano grew up in Barca de Heredia, a small town well known for its mask making. As a child, he learned to make masks under the tutelage of his uncle who was a mask maker.

In Arguedas’ Fibonacci, two rows of mini paintings are arranged on a board, three on the first row and five on the second row. The term, fibonacci, refers to a sequence of numbers wherein each subsequent number is the sum of the previous two. In the center of the first row, there is a painting of a man with a firearm facing the elephant. The shooting is echoed in the bottom row. If the subsequent number is the sum of the previous two, then a shooter + elephant = the scenes on the bottom row of mini paintings, in this case, the shooting of Kennedy(?) as he parades down the street with Jackie Kennedy (in pink) in an open convertible. (Unfortunately, I didn’t have the leisure to read the caption of this particular work. The deductions I make here regarding the connection of Fibonacci with the fibonacci sequence of numbers are strictly my own.)😅 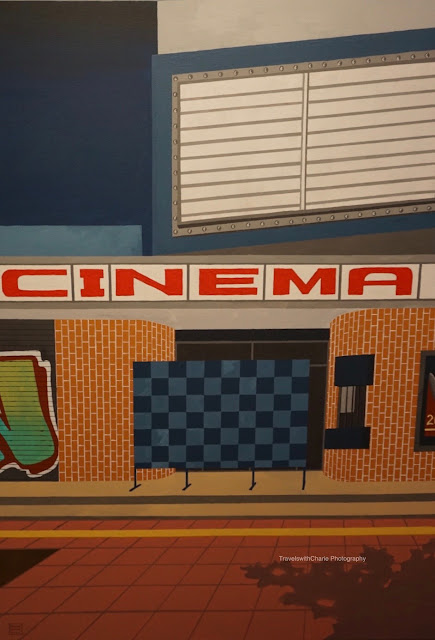 Cinema 2000, Oscar Soto, acrylic and tempera on canvas
Oscar Soto is an architect specializing in scenographic designs. His works have been seen on stage at the National Theater and at the Teatro Popular Melico Salazar and in commercials, musical videos and corporate ads. Soto’s works were selected by the Museum as part of its program to revitalize the local arts scene by displaying the selected artists’ works in the Museum’s temporary gallery. The theme of this exhibit is Imaginarios de congestión. 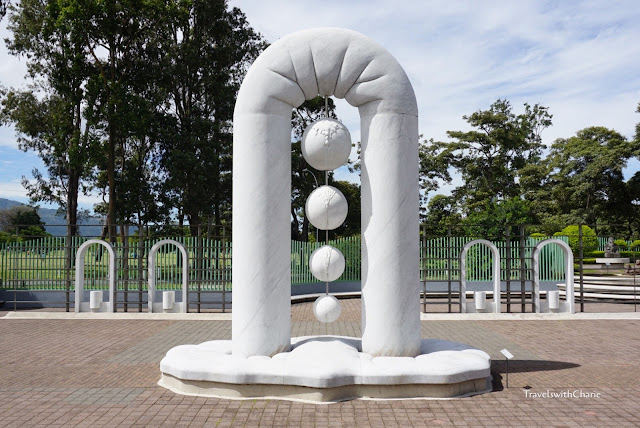 Imagen Cosmica (Cosmic Vision), Jose Jiménez Deredia, Carrara marble
The Sculpture Garden at the Museum was designed by Jiménez Deredia in 2004. The garden sits on the eastern border of La Sabana, the largest park in Costa Rica. Jiménez Deredia has the distinction to have one of his works, Saint Marcellin Champagnat, occupy an enviable space at St. Peters’s Basilica in the Vatican. He’s the only non European to have done so.

Jiménez Deredia recounts how as a child he would visit the National Museum of San Jose where he found on display, gigantic stone spheres attributed to the extinct Diquís culture and how these same spheres have inspired him and his works. In Cosmic Vision, there are four vertically aligned spheres that vary in size. Perhaps the meaning of these spheres may be explained through his 2019 sculpture exhibition in San Jose entitled, The Force and Universality of the Sphere. According to the brochure, Jiménez Deredia wants to  “convey a world view of the spherical nature of life” and “that a piece of sculpture leads us to become aware that we are stardust in transmutation”.

“Who does not know the ancestors that inhabit it is destined to walk in the dark.”   Jiménez Deredia 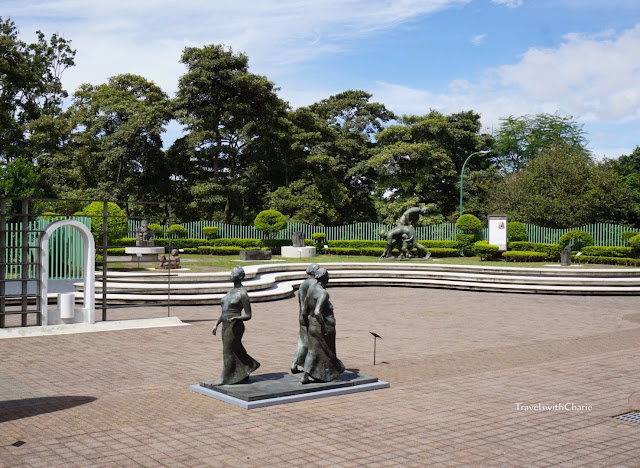 Zuñiga was born in Costa Rica to parents who were both sculptors and from whom he learned the art of sculpting in his favorite medium, bronze and stone. During his 20s, he left Costa Rica to study at the Escuela de Bellas Artes in Mexico where he lived until his death in 1998. Zúñiga’s 1981 Tres Mujeres Caminando, edition of 4, was sold at Sotheby’s in 2006 for a staggering sum of $1,024,000. 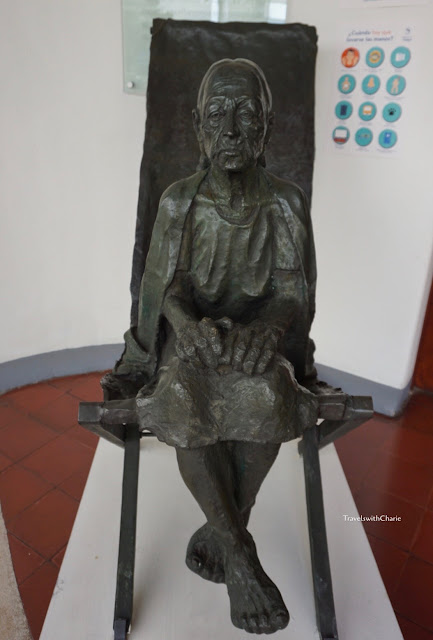 I’ve included this figure of a woman who occupies a prominent space at the entrance to the museum. She sits with dignified composure, watching people come into the museum. Sadly, I could not find the provenance of this piece. 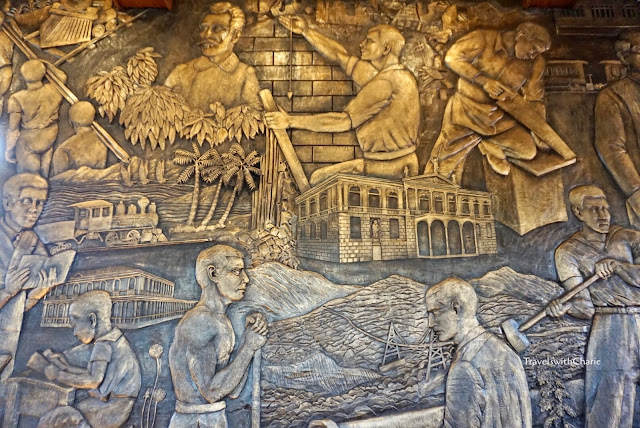 The Golden Room
This mural depicts the history of Costa Rica after it regained its independence from Spain. Luis Féron Parizot, a French artist who lived in Costa Rica for ten years, carved the bas reliefs in stucco and painted them in bronze. In this particular panel, the sculptor shows the progression of education and learning and the hard work by Costarricenses to build infrastructure across the country. 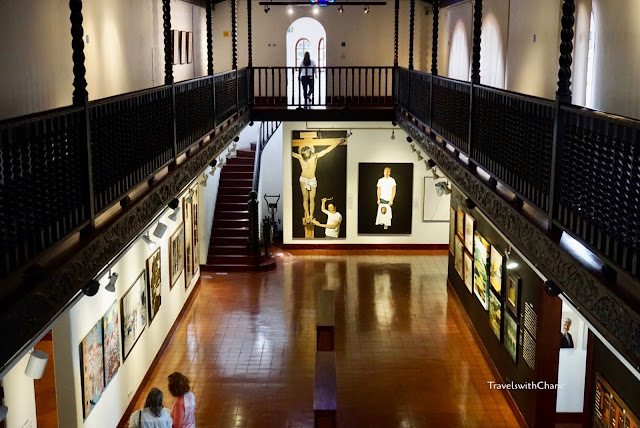 Central Nave of the Museum 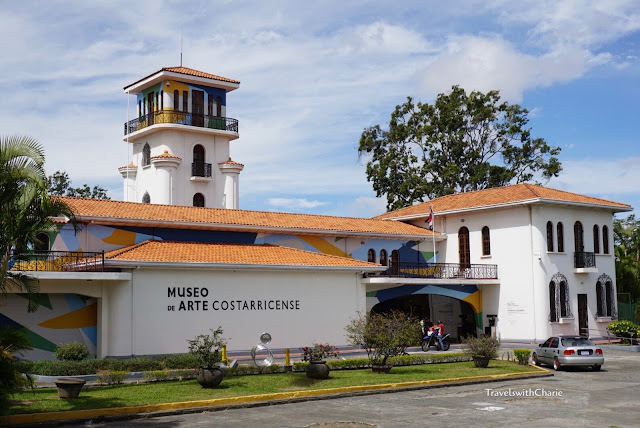 Old Airport Terminal now the MAC
The old international airport was built in 1940 and operated until 1955. It was designed by the architect, Jose Maria Barrantes Monge, in 1937 in the neocolonial style. It became the home of the Museum of Costa Rican Art in 1978. The Museum has a collection of 6,400 works of art and is worth a visit. I wish we had more time at the museum. I would have loved to linger and learn more about the talented and exceptional Costa Rican artists. Bonus: entrance is free!!!