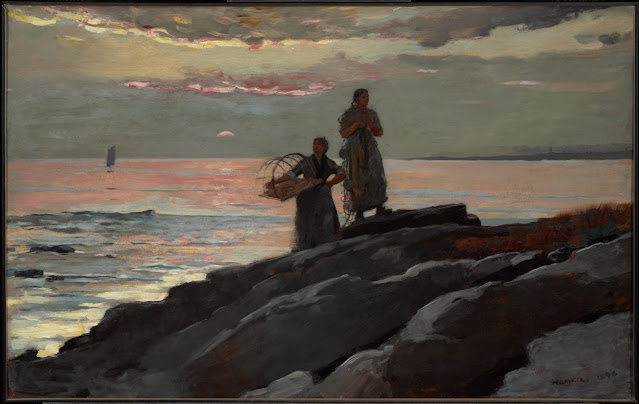 Winslow Homer, Saco Bay, 1896, Oil on canvas.
The Clark Art Institute, 1955.5
The Clark Art Institute
The Berkshires is one of the most beautiful places in the United States. Sleepy little towns snooze amidst lush vegetation and green hills. At Williamstown, you are immediately drawn by the calm and restful appeal of this town. This is why it is so surprising to find a museum of the caliber of the Clark Art Institute in this pastoral setting. Sterling Singer Clark, heir to the Singer sewing machine fortune and his wife, Francine Clary, founded the museum in 1950. Their collection of  French Impressionist and Academic paintings including works by Renoir, Degas, Gauguin and Van Gogh form the core collection of the museum together with their silver, porcelain, drawings and print acquisitions. The museum opened to the public in 1955. Sterling Clark also had an interest in American artists and collected the works of Winslow Homer and John Singer Sargent.

The museum is at 225 South Street, Williamstown, Massachusetts. clarkart.edu

Frick Collection
Echoing the affluence of 5th Avenue is the mansion housing the Frick Collection. This was the former residence of Henry Clay Frick, a Pittsburgh steel industrialist. He bequeathed the mansion and his art collection to a Board of Trustees to perpetuate the collection and form a center for art studies. The mansion has a colorful garden along 5th Avenue. The museum collection includes priceless works of art by Rembrandt, Velasquez, Goya and a rare Van Eyck, among others,

The Frick Museum is on 1 East 70th Street (between Madison and 5th) in New York City. frick.org.

Isabella Stewart Gardner Museum
What is so unique about this museum is the building itself. It has the look and feel of a Venetian palace with windows overlooking an inner courtyard surrounded by a 12th century cloister. Mrs. Gardner had traveled in Venice with her husband and found inspiration in the palazzos of the city. The art collection includes a Self Portrait by Rembrandt and a portrait of Mrs. Gardner by John Singer Sargent. In 1990, thirteen of the museum’s paintings including masterpieces by Rembrandt, Vermeer and Degas were stolen. There is a huge reward outstanding for the return of these paintings.

The museum is located at 25 Evans Way in Boston. gardnermuseum.org

The Met Cloisters
This small museum in New York City is at the end of a long bus ride on 5th Avenue. Five cloisters were transported from France and reconstructed at Fort Tryon Park, above the Hudson River. In one of the cloisters, herbs (of the variety planted during the Middle Ages in Europe), are grown here to complete the picture. Each cloister is distinct from the other and it’s fascinating to see the different styles of columns of each cloister. The view over the Hudson is refreshing and reminiscent of views from medieval European castles above the Rhine River. This museum is one of a kind.
The Cloisters is located at 99 Margaret Corbin Drive, Fort Tryon Park. The M4 bus that runs along Fort Washington Avenue makes its final stop in front of the Cloisters. https://www.metmuseum.org/visit/plan-your-visit/met-cloisters
New York Museum of Modern Art
I will never forget the first time I saw Van Gogh’s Starry Night at the MoMA. I could not take my eyes off it. Since then I have followed Van Gogh’s footsteps from his childhood home in Eindhoven to his apartment in Montmartre, to Arles where he painted the Night Café and then to Auvers where he is buried next to his brother, Theo, at a cemetery behind the church he painted and made famous. There are more modern masters in this museum including many of the Impressionists and celebrated American artists like Jackson Pollack and Andy Warhol. Henri Matisse’s The Dance and Picasso’s Les Demoiselles d’Avignon are some of the highlights of the collection. Umberto Boccioni’s sculpture, Unique Forms of Continuity in Space, is a fascinating creation of motion in bronze.
The MoMA is located on 11 West 53rd Street between 5th and 6th Avenues. www.moma.org.
The Phillips Collection 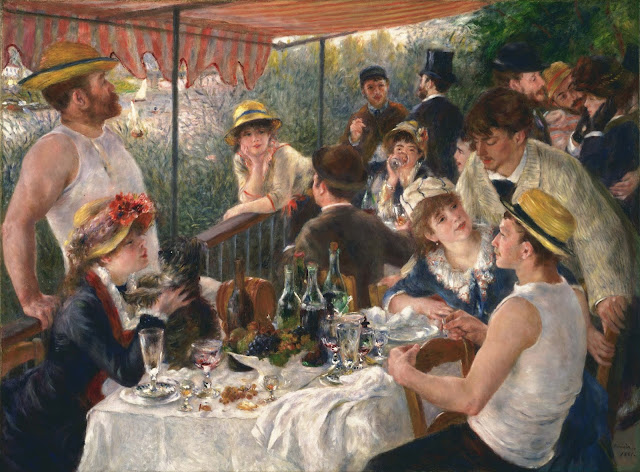 Luncheon of the Boating Party, Pierre August Renoir, 1881**
Renoir’s Luncheon of the Boating Party is the highlight of the Phillips collection. This large painting (56 in x 69 in) is in a room by itself and you can sit in front of it and feel as if you are one of the “boating party”. What is so intriguing about this painting is that one of the guests at this party, Gustave Caillebotte, (he is shown seated backwards in his chair) who is also an Impressionist painter. Caillebotte's works include Les Raboteurs (The Floor Scrapers) and Paris Street, Rainy Day which are at the Chicago Art Institute. The Phillips collection includes works by Van Gogh, Cezanne, Picasso and American painters like Homer Winslow, Maurice Prendergast and Georgia O’Keefe. I especially enjoyed the Prendergast paintings.
The Phillips Collection is located at 1600-21st Street NW, Washington D.C. www.phillipscollection.org
San Francisco MOMA
This museum has been producing blockbuster exhibitions like the Marc Chagall retrospective in 2003. My favorites in the collection are Diego Rivera’s The Flower Carrier, Jackson Pollack’s Guardians of the Secret and Magritte’s Les Valeurs Personnelles. Rivera’s Flower Carrier is so evocative of his works on the burden the lower classes of society have to carry. Pollack’s oeuvre intrigues the viewer and challenges him/her to discover the “secret”. And Magritte’s work gets the viewer involved with the familiar objects in the painting and what they might represent.
The MOMA building is a work of art in itself. It’s worth spending some time in front of the structure to better appreciate the architectural design of Mario Botta.
The San Francisco MOMA is on 151 Third Street between Mission and Howard streets. www.sfmoma.org.
*Image of Saco Bay by Winslow Homer is from the Clark Art Institute image gallery. The Clark Art Institute provides open access to available digital images which they believe to be in the public domain.
**Image of Luncheon of the Boating Party by Pierre Auguste Renoir is from the Wikimedia Commons media files under public domain. “The official position taken by Wikimedia Foundation is that faithful reproductions of two-dimensional public domain works of art are public domain.”
*****
Note: This article was written prior to 2005 and has been updated here.